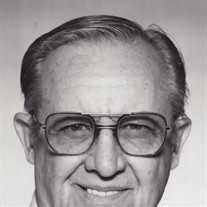 FORT WORTH -- Andrew Charles "Andy" Shafer of Fort Worth, TX went home to be with the Lord on Sunday, May 25th, 2014. Memorial Service: Saturday, June 21, 2014 11:00 a.m. at Calvario Funeral Chapel (formerly Shannon North). Inurnment: Shannon Rose Hill Memorial Park Andrew was born on December 8, 1924 to Clayman and Julia Shafer in South Bend, IN. He was married to Mary Frances Cox on June 23, 1951. They were married for 59 years before Mary passed away on January 29, 2010. Andy was a veteran of World War II. He was a member of the 8th Air Force stationed in England and operated a radio on a B-17. He successfully participated in over 30 missions during the war, concentrating on railheads and other facilities vital to the German war effort. After the war Andy received an engineering degree from Tri-State University in Indiana, and obtained a job at General Dynamics in Fort Worth, TX where he worked until his retirement. Andy was an avid gardner, bowler, and Cowboys fan. He also enjoyed cookouts with his family, hunting and fishing, and had a wide range of interests. Survivors: sons, Ron Shafer and wife Kim, of Big Springs, TX, Mike Shafer and wife Yvonne, of Fort Worth TX, and Dr. Douglas Shafer and wife Lori, of Waco, TX.; grandchildren, Yvette, Melody, Sara, Callie, Kiersten, Breelin, Andrew, and Ethan.

The family of Mr. Andrew Charles Shafer created this Life Tributes page to make it easy to share your memories.

FORT WORTH -- Andrew Charles &quot;Andy&quot; Shafer of Fort Worth, TX...

Send flowers to the Shafer family.