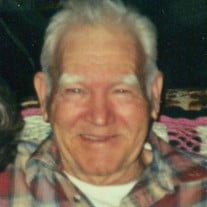 Everett Calvin Mason, 90, passed away on Sunday, March 26, 2017 at his home in Newark, TX. A memorial service will be held at Calvario Funeral Chapel, 111 W. Northside Dr., Ft. Worth, TX. 76164 on Thursday, March 30th, at 2 PM, to be followed by a graveside service at Greenwood Memorial Park, 3100 White Settlement Rd. in Ft. Worth. Everett was born in Panama, OK. He came to Ft. Worth as a young boy with his family. He became the man of the house at age 15, when his father passed away. Everett served in the US Navy in the WW II Pacific Ocean Theater as an aircraft carrier fireman. After the war, he learned the plastering business, and started Mason Plastering Company in Fort Worth. The company thrived for many years, building churches, schools, shopping centers, and hospitals all over north Texas. Everett married Betty Jean Jemison in 1952. They were happily married for 59 years at the time of Betty’s death. Everett and Betty had 2 children, Debra and Robert. Robert gave them four grandchildren, and Debra gave them two. Everett’s descendants now include an additional nine great grandchildren. After retiring from plastering, Everett returned to his farming roots in Newark, TX where he raised amazing amounts of fruits and vegetables. He was a hard-working man, a fine example of the Greatest Generation. Everett loved God, family and country. He will be treasured by friends and loved ones for his great stories, his love, kindness, and generosity. Everett was preceded in death by his wife, Betty J. Mason, his parents, Calvin Mason, and Lillie Mason, brothers, Fred Mason and Jessie Mason, and sisters, Ruth Bruner, Bessie Arwine, and Dorothy McKeon. Survivors include Everett’s sister Viola Wallis, of Azle, daughter Debra Jones, and her husband Michael Jones of Fort Worth, son Robert Mason of Newark, grandchildren, Randell Thomas, Jennifer Klaerner, Jessica Morrison, Julee Mason, Geoffrey Jones, and Caitlin Jones-White.

The family of Everett Calvin Mason created this Life Tributes page to make it easy to share your memories.

Send flowers to the Mason family.