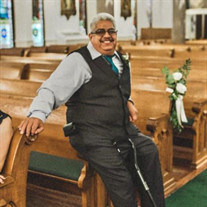 Guadalupe "Pipí" Romo, our beloved brother in Christ, departed this earth to join our Father in heaven on Friday, June 19, 2020. Guadalupe was born in 1964 to his parents, Emilio Romo and Marina Guerrero in Jalpa, Zacatecas. Guadalupe married his wife Indelisa Romo in 1988. The couple gave birth to two children, Emilio and Abigail Romo. Aside from his wife and children, Guadalupe is survived by his siblings, Emilio, Mariano, Candelaria, Elsa, Jesus and Veronica and his grandchild Mateo. Guadalupe was also anxiously awaiting the arrival of his second grandchild, Gema. Guadalupe was a man of many virtues. From his early years, Guadalupe developed a knack for learning many trades and skills. Whether it was helping a good friend repair a car or helping a family member renovate their home, he was the man for the job. No task ever seemed impossible to him. His many years of work experience had certainly given him “colmillo” like he’d love to say. Aside from his ingenuity at getting the job done, the greatest virtue Guadalupe possessed was his ability to make a room full of people smile and laugh in an instant. “Pipí”, as he was known to many of his close friends, had a one-of-a-kind sense of humor. He had a genuine gift of pulling you into his absurdly comical tales. Within seconds of meeting him you would find yourself bending over in laughter. Guadalupe could bring a smile to anyone’s face. Even while battling the anguish of his final ailments, Guadalupe remained a man full of happiness and sincere joy. That is how his family hopes you will remember him as they invite you to join them in honoring the life of Guadalupe Romo, their beloved husband and father. A vigil will be held from 4:00 - 8:00 PM on Tuesday, June 23, 2020 at Calvario Funeral Chapel in Fort Worth. A Mass will be held at 10:00 AM on Wednesday, June 24, 2020 at Holy Name Catholic Church followed by burial service at Mt. Olivet Cemetery.

Guadalupe "Pipí" Romo, our beloved brother in Christ, departed this earth to join our Father in heaven on Friday, June 19, 2020. Guadalupe was born in 1964 to his parents, Emilio Romo and Marina Guerrero in Jalpa, Zacatecas. Guadalupe married... View Obituary & Service Information

The family of Guadalupe "Pipi" Romo created this Life Tributes page to make it easy to share your memories.

Send flowers to the Romo family.