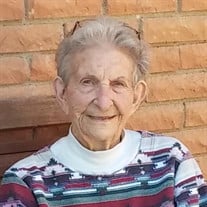 Iva Eugenia (Bardin) Williams passed away quietly on 7 December 2015 after a series of complications from a fall in October this year. Born 9 March 1921 in Brownwood, Texas, as the youngest daughter of Andrew and Dana Bardin, and one of seven siblings, she was almost 95. Her long life was personified by a love of history, God, patriotism and family. She was known for her compassion and ability to help her friends and large extended family. She lost her mother when only 4 years old and shortly after moved with her father and brothers and sisters to the west Texas oil boom-town, McCamey, Texas, shortly after it’s founding in relatively wild Upton County. Since her family was one of the early settlers there she identified with the area all her life. For example she graduated from the High School with honors and continued to attend McCamey High School reunions well into her late 80s. On the United States entry into WWII, she volunteered to serve in the Women's Army Auxiliary Corps early in 1942, and one of the first to transfer into the Women’s Army Corps (WAC) where she served until 1946. She initially served at Fort Des Moines, Iowa, as it was activated as a women’s army training post, where she performed duties associated with the post CADRE. Later and as a WAC NCO, she served at South Fort Meyer near the then new Pentagon and later was the First Sergeant for the unit barracked near the State Department and Office of Strategic Services. An early advocate for the Women in Military Service for America Memorial in Washington D.C. she was among the first 1,000 to join the Women’s Memorial Foundation. In a comment, Technical Sergeant "Genie" Bardin service recorded in the Memorial database said, “I remember the most wonderful friends and our pride in service.” She received the World War II Victory Medal, Women's Army Corps Service Medal and Honorable Service Lapel Button. After her service she was hired by AT&T into their Los Angelas business office where she worked on establishing new business service which had been curtailed by WWII. While with AT&T she relocated to Odessa, Texas, to be closer to her family in and around McCamey. In west Texas she married a High School friend, William “Bill” Ford Williams, that also had returned to McCamey after his WWII service as a fighter pilot with the 9th Fighter Squadron in the Pacific Theater. After they were married in 1951, he returned to active service with the USAF at Barksdale AFB, Bossier City, Louisiana. While he was in B-47 training they lived in Florida, California, and returned to Barksdale AFB for operational flight duty. When Little Rock AFB, Arkansas, was opened they moved there in 1955 and she helped her husband who was chief of evaluation and later commanded a flying training squadron. After that they moved their family to to Fort Worth followed by a last tour at Little Rock where her husband retired and they moved back to Fort Worth. All their four children graduated from Western Hills High School in Fort Worth. After retiring she worked briefly to help organize and document safety-related reports for insurance companies and she and her husband traveled throughout the United States usually in a recreational vehicle. Their travels took them back many times to the west Texas where they grew up and the parks and towns around the Davis Mountains. Along the way they reared three sons and one daughter. Genie also was a charter member of the Western Hills Baptist Church, Fort Worth, which was a big part of her life. She devoted her time to Boy and Girl Scouts, reading tutoring, and teaching Sunday School for children and adults. This continued into retirement and continued to serve on Church committees and working groups. Her husband preceded her in 2006. She is survived by one older sister Evea Huffaker of Dripping Springs; her four children (all married), Skip and Pam Williams of McLean Virginia; Bruce Williams and Jenny Zeilon of Richmond, California; Richard and Nancy Williams of Garland, Texas; Barbara and Eric Malès of McLean, Virginia; with six grandchildren (three married), Zachary and Katie Williams of Duluth Minnesota; Andrew and Paige Williams of New Haven, Connecticut; Evan and Joni Williams of Colorado Springs, Colorado; PO2 Zane Williams USN, of San Diego, California; Ramsay Williams of New York, New York; Billie Malès of Chicago, Illinois, and, one great-grandson, Chase Alexander Williams of New Haven,Connecticut.

Iva Eugenia (Bardin) Williams passed away quietly on 7 December 2015 after a series of complications from a fall in October this year. Born 9 March 1921 in Brownwood, Texas, as the youngest daughter of Andrew and Dana Bardin, and... View Obituary & Service Information

The family of Ms. Iva Eugenia "Genie" Williams created this Life Tributes page to make it easy to share your memories.

Send flowers to the Williams family.