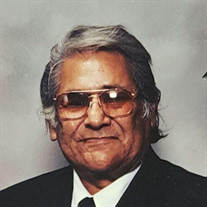 Johnny (Juan) Guerra Sr. passed away on November 25, 2020, in Fort Worth, Texas, after a brief illness at the age of 87. Born in Dallas, Texas, on August 24, 1933, he grew up in Dallas and his family lived for a short time in the Dallas community of “Little Mexico”. After marrying his first wife, Angelina (Angie) Becerra Guerra he worked in Dallas as a welder where he was transferred to a new location in 1963 in rural Garland before it became one of Texas’s largest cities in the state and nation. After marrying his second wife, Lupe Linares in the late 70s, he then resided in Fort Worth. His strong belief in God led him to become civically involved as a civil rights activist for Hispanic issues in the 1970s to 1990s. He volunteered as precinct and election judge for many years for the Democratic Party and served as an Executive Committee member. Mr. Guerra was a long time member of the League of United Latin American Citizens (LULAC), served on the Parade Committees for Fort Worth Fiesta Patrias and La Gran Mexican Independence Day Parades. He was a recipient of “Leaders of Tomorrow” presented by Tarrant County. Many in his Fort Worth neighborhood referred to him as “the Godfather” because of his mentoring of Hispanics to speak up for their rights. He expressed much pride in his Mexican American and Indian heritages. He was admired for his kindness to strangers, and hosting parties annually for his birthday. He was a talented dancer, winning many dance contests in the 1950s. He enjoyed joking and had a wonderful sense of humor. His children inherited their father’s sense of humor, creativity, artistry, generosity, and love of life. He is survived by his wife Lupe Guerra; his children Johnny Guerra Jr., Yolanda Guerra (Robert Arredondo), Dora Gonzales (Ernest King), Nora Luna, Estella Muñiz (Fidel), Gilbert Guerra (Tony) and step-son Johnny Jaco. His grandchildren included Christopher Poston, Miguel Guerra, Lavita, Clemente and Annissa Luna. He also had ten great-grandchildren. His siblings were Candy Martinez, Connie González, Pete Guerra, and Mary Soto. Mr. Guerra was preceded in death by his parents Cresencio and Teodora Guerra, his former wife Angelina (Becerra) Guerra Garza, daughter Elizabeth Guerra, son-in-law William (Billy) R. Luna, and daughter-in-law Nicolasa Morales. Visitation services will be held on Tuesday, December 1, 2020, 2:00 p.m. to 6:00 p.m, Rosary from 6pm to 7pm. at Calvario Funeral Chapel, 111 W.Northside Drive, Fort Worth. Interment will take place on Wednesday, December 2, 2020, at Calvario Funeral Home Chapel at 10am with burial following at Mount Olivet Cemetery 12 noon at 2301 N. Sylvania Drive, Fort Worth, TX.

Johnny (Juan) Guerra Sr. passed away on November 25, 2020, in Fort Worth, Texas, after a brief illness at the age of 87. Born in Dallas, Texas, on August 24, 1933, he grew up in Dallas and his family lived for a short time in the Dallas community... View Obituary & Service Information

Send flowers to the Guerra family.