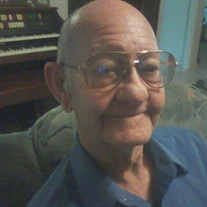 Maurice Wayne Applewhite, 82, passed away on Saturday, December 16, 2017. Funeral: 10:00 am Wednesday at Calvario Funeral Chapel in Fort Worth. Interment will follow at Dido Cemetery. Visitation: 6:00 - 8:00 PM Tuesday evening at the funeral home. Maurice was born February 25, 1935 in Fort Worth to the late Richard Applewhite and Mildred Summers Applewhite. He married Thelma Causey on December 3, 1954. They lived in Fort Worth were he began working for the Tarrant County Water Board as a maintenance man. He transitioned to Tarrant Regional Water District as the Eagle Mt. Lake Superintendent where he worked and retired after 40 years. He was a 60 year member of the Boyd Masonic Lodge and he served in the US Navy Reserves for 8 years before being Honorably Discharged. Maurice was preceded in death by his parents; daughter, Karen Kholer; grandson, Clifton Maurice Kohler, brother, Doug Applewhite; and sisters, Vivian Milligan and Imogene Bradley. Survivors: Wife of 63 years, Thelma Applewhite; children, Teresa Gayle Eller and husband Joseph and Paula Ethridge and husband Lee; granddaughters, Kandace, Krystal, Hailey, Hollie, Nora, Marci; great-grandchildren, Brooklyn, Lillian, Bentley, Luke; and a host of nieces, nephews, friends, and extended family members.

The family of Maurice Wayne Applewhite created this Life Tributes page to make it easy to share your memories.

Send flowers to the Applewhite family.