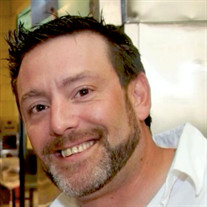 Paul’s Obituary On Tuesday morning, December 29, 2020, Paul Leandro, loving husband, son, brother and friend passed away at his Arlington, Texas home at age 46. Paul was born on December 28, 1974 in Smithtown, New York to Augusto Leandro and Mary Lynn Leandro. He studied at Queens College, in New York and graduated in 1994. He formally taught at the Career Institute of Health and Technology for five years and then moved to Texas in 2013, where he worked at Tarrant County College. On February 15, 2019, he married Alicia Leandro, where he became the father figure of his stepson Samuel Ayala. Paul was raised in Elmont, New York where he grew to make bonds, memories and impacts on those who had the opportunity to meet him. Those that knew him can reflect on great memories that live throughout the years. He went to Gotham Avenue school and Elmont Memorial Junior - Senior high school. Where he made a lot of childhood friends and memories. He was known as a good athlete, so good, some friends called him “Showtime”. He was very family oriented and always went out of his way to build relationships and memories within the family. He loved cooking for the people he cared about and spending quality time with them. When he moved to Texas he fell in love with the environment and country culture. His favorite football team was the Dallas Cowboys but he still showed his support for his hometown when watching baseball by rooting for the New York Yankees. His coworkers and friends in Texas called him “Yankee”. Although he loved when native Texans would call him “Redneck” because of his love for country music and hobby of shooting. At the end of the day family was his priority, most importantly his nephew Anthony Jr, and niece and goddaughter Emma Victoria Lopez who he cared about and loved very dearly. He was known for his outgoing personality and his kind, compassionate spirit. Paul was preceded in death by his father Augusto Leandro and daughter Sophia Lynn Leandro. He is survived by his loving mother Mary Leandro, his wife Alicia Leandro, stepson Samuel Ayala, his sister Marie Lopez, brother Anthony Leandro, brother Richard Leandro.

The family of Paul Michael Leandro created this Life Tributes page to make it easy to share your memories.

Send flowers to the Leandro family.