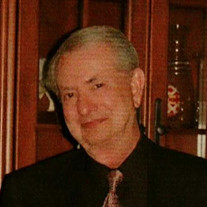 Ramon Lee DeArman died unexpectedly on Saturday, March 4, 2017 in North Richland Hills, Texas. He was 77 years old. Service: 10:00am Thursday, March 9th at St. Laurence Church in Southlake, Texas. Visitation: 5-7p Wednesday, March 8th at Calvario Funeral Chapel, 111 W Northside Dr. Fort Worth. All are welcome to attend and celebrate Mr. DeArman’s life. Memorials: In lieu of flowers, please donate to the Down Syndrome Partnership of North Texas. Ramon was born on February 21, 1940 in Fort Worth, Texas to his parents, Virginia Lee DeArman and Ramon DeArman. He graduated from Texas Christian University with a degree in business in 1974. He also served in the armed forces in the United States Navy from 1959-1965. In addition to being a beloved father and grandfather, he was an avid golfer and enjoyed many hobbies including fishing, coin collecting, and family ancestry. He was currently working at Cooper’s Golf Park in Euless, Texas at the time of his death. He was preceded in death by his father Ramon DeArman of Fort Worth, Texas, his mother Virginia Lee Harper and stepfather, Edward Harper, of Mansfield Texas. Ramon is survived by his daughter and son-in-law, LeAnn and Preston Sweny, his son, Travis DeArman, and his daughter, Leslie DeArman; four grandchildren: Gabriella Graceffo, Andrew Graceffo, Adalyn Sweny and Sophia Sweny; and his very loving friend, Ms. Diane Sopko. Arrangements provided by Calvario Funeral Home, Fort Worth. 817-624-2191

The family of Ramon Lee DeArman created this Life Tributes page to make it easy to share your memories.

Send flowers to the DeArman family.